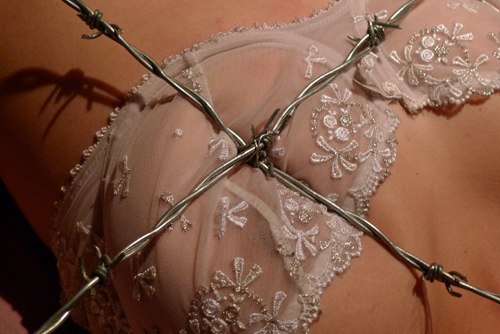 One Sunday afternoon, taking Guy by surprise (yes, he allowed me to set up my work without knowing what I was about to perform).
A sound installation in the corridor, a performative installation downstairs.
I previously recorded myself singing the history of my encounters with Guy over Barry White’s music. I recalled how, since the very first day, when I agreed to make a project for his space, he tried different unwanted sexual approaches towards me. In the song I detailed how upset and uncomfortable I felt all the times and that, tired of his attempts, I was ready let him get what he wanted. At the end of the song I was asking him to join me downstairs, in his bed, where I was lying half naked and totally still. When the sound was reaching a silent point, people where allowed downstairs. I waited for him to come on top of my blanket made of barb wire for five hours, but he did not join me in the end.