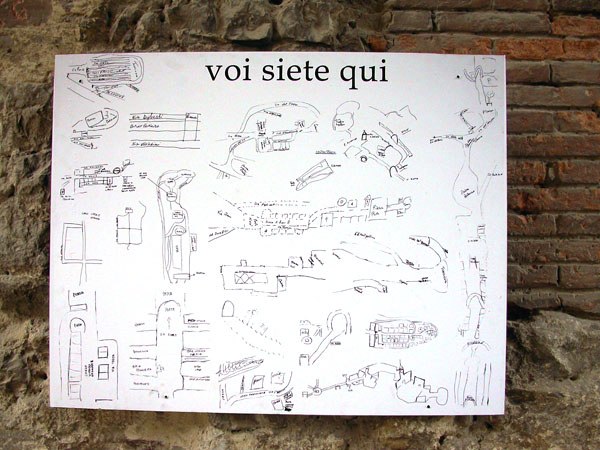 Interviewing the inhabitants of the village for a week, getting to know their habits, their hidden social dynamics and the antics between one another. I recorded their voices, I also collected maps of the village that adults and children had drawn for me during the interviews.

Few months later, in the middle of night, I stuck 72 posters all around the village, taking everyone by surprise. I reported some of the inhabitants (anonymous) opinions about their lives, exposing their memories, inner conflicts, hopes and taboos.

The following morning there were no posters left. The authorities did not find any signature on them, except for the written sentences and, not recognizing their own words, decided that a sort of vandalism had happened during the night and that taking down all the posters was their best answer.

My intervention aimed to let the village face its own history and truths, without judgement or taking sides. I wanted to offer them a possible mirror to look into, so that communication among them might finally take place. The next day I managed to slowly replace my posters under people’s eyes, so that the distrustful inhabitants could recognize and welcome me back, finally allowing themselves to read their own story.