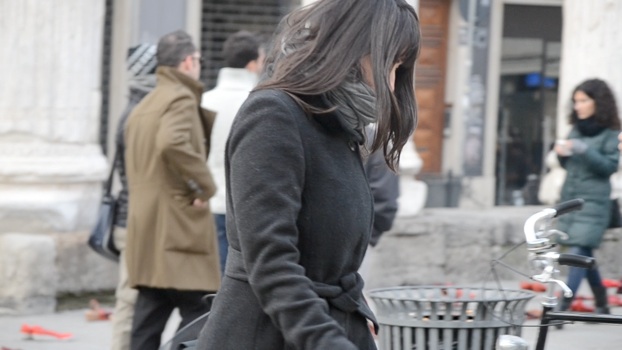 In a very busy square of Milan, during an art event to promote awareness about the International Day against women’s violence, I spent 3 hours laying on a bench for less than a minute and then targeting the first man I was seeing in front of me after opening my eyes. I  walked to him, either if he was alone or with someone else, touching his arm, his shoulder, addressing him very friendly. “Do you remember?”, when he replied “No I am sorry…I don’t”, I began telling him one of my stories, that I actually remembered the day  he was pushing his sister on a wall in front of everyone ( other versions with other men were: him hitting his wife or raping his girlfriend, hitting his mother, etc.. ). I told each man a different, very detailed story. After delivering my lines with a sweet but firm voice, I wasn’t allowing any reply, leaving him in the middle of the square alone, while he was still talking to me. Then I walked to lay down again on a far away bench. After each of these interventions, every targeted man was approached by one of my assistants to deliver him a card and few words of explanation of the event.

Each man reacted similarly at the beginning, immediately replying that I got it wrong, “it wasn’t me”, then some of them started to insult me, some asked me if it was a joke, some were speechless, bemused, upset. One, after few minutes I left him, reached me on a bench and threw me on the floor while I was lying, we fought and then we got separated by bodyguards.