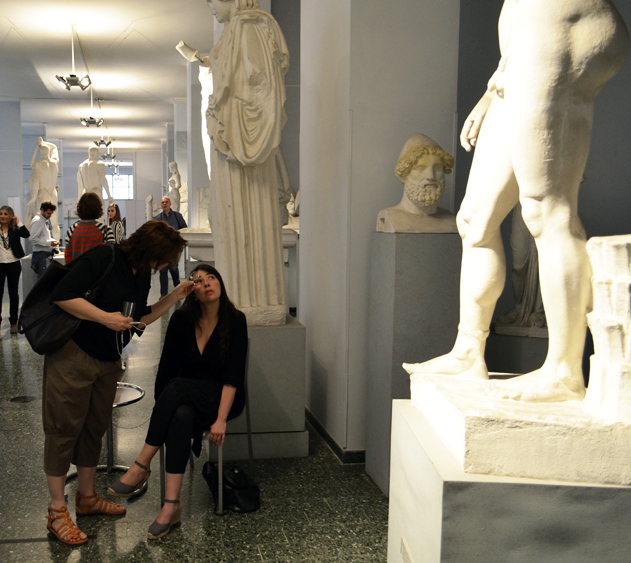 The art gallery made of plaster casts in the University, also known as the Classic Art Museum, includes hundreds of Greek sculptures’ copies (both originals and Roman copies) coming from various historical periods and geographical areas. The concept of copying vanishes before my eyes in the absence of the original: I observe the statues and I consider them equal representatives of time passed by, in each case referring to a period of history that comes back to me in fragments, without understanding  any aspects of the copied subjects’ daily life. Looking at the statues I perceive their poses, their grandeur, their impossible to penetrate glance  as the whole narrative that underpins them. I observe bodies caught in their own being, vanished pupils in eyes that do not look. Do they?

I sat motionless for two hours, trying to actualize the concept of ‘copy’ of Platonic derivation (in the definition of μίμησις / mimesi as phantasmata, where Plato explores the creation of simulacra, of illusory copies by the artist in order to reveal other aspects of reality) by  staring at Ares standing in front of me, engaging his gaze. My aim was to get lost in his eyes, express a reciprocity between me and him, emphasized by my completely dilated pupils, like his non-existent ones. It was possible for viewers to come close to me and observe, thanks to a magnifying glass, the reflection of the statue in the total black of my eyes without irises.

My exercise in obstinacy became in the end a strenuous attempt to wake up Ares; a silent, eager and crying supplication for him to hold my gaze.