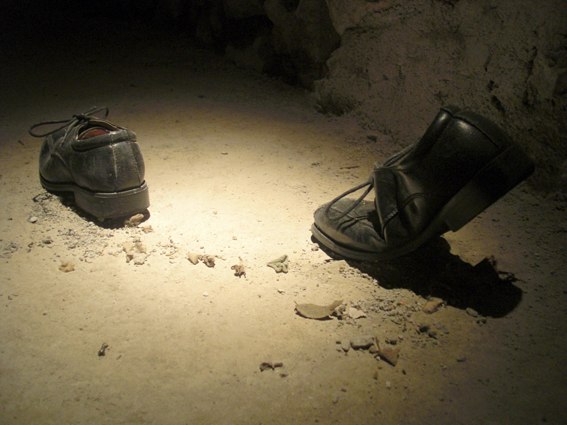 The festival takes place in the medieval village of Maranola (located between Naples and Rome) and I chose an old tunnel, which is still a consistent part of childhood memories of several inhabitants, to work in. From the 60’s till the 80’s many children used to play wildly in it, running outside towards a big open garden that represented at that time their fantasy of a forbidden and unexplored countryside…freedom in one word.

I placed a sound installation at the entrance of the tunnel, made by recording three kids playing tag and screaming at each other. That sound was quite striking, placed there to contrast with the quiet, immediate vision of the space. Then I fixed on the floor 5 pairs of children shoes in the running position. The tunnel was “closed” at the end by a wall of lanterns which was not possible to cross, reminding a sense of border embedded with the tunnel itself. Viewers were allowed to walk freely inside till the hanging lights.