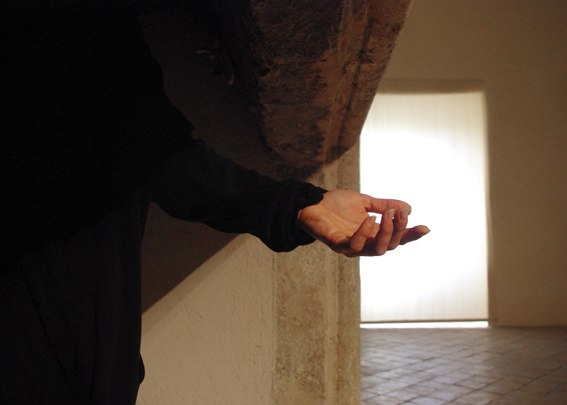 This is one of my favorite paintings from the late production of Antonello Bulgini (1960/2011), I have been fascinated by it for a long time and still I am. I read this painting as a visual representation of the subconscious, as Freudian psychoanalysis consider animals to be. The image of a man quietly allowing the animal to vomit wires (as they were long intricate words…) really reminds me the experience of the therapy and the need for the human soul to release pressure, to say out loud at least once what cannot usually be said.

The blindfold performer was inside a fireplace on top of which the painting was leaning. She had to keep one hand outside to invite people in, one by one. Once inside, she had to say – coming very close to the ears of the visitor – few or more lines in italian language, taken from lyrics of chosen songwriters regarding feelings of inadequacy and melancholy. She was alternating lines in order to deliver always something different for every viewer.