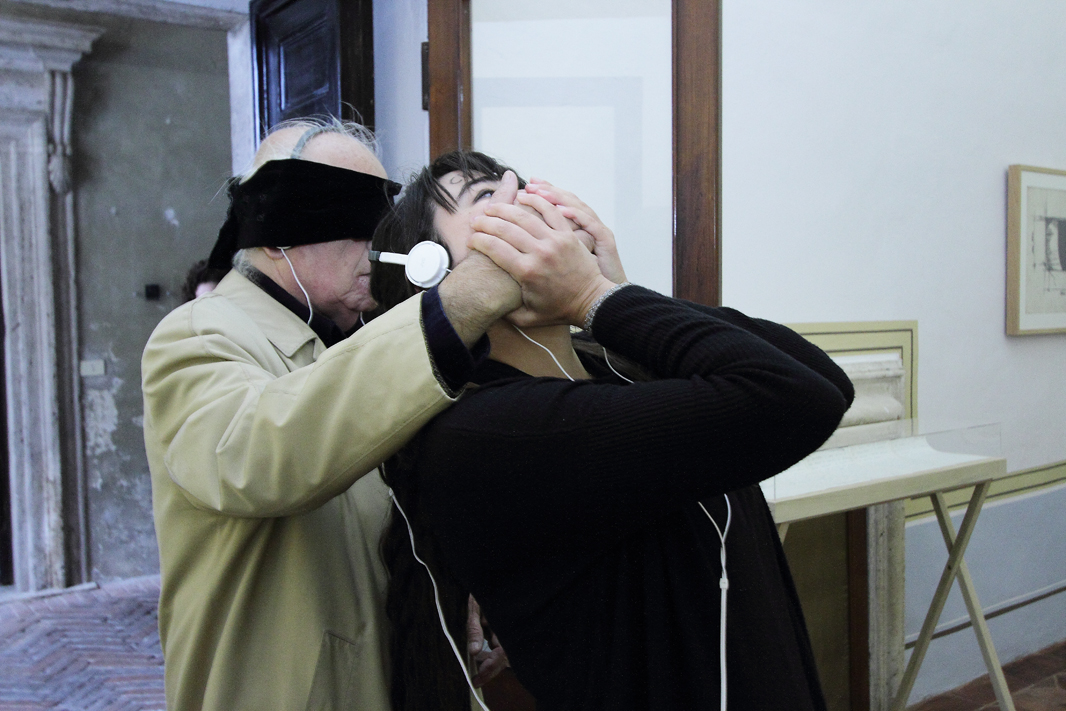 I interpreted Francesco Lo Savio’s (1935/1963) body of work as the continuous attempt to move away from the zero degree of matter, from the (existential?)void that in his practice seemed absorbing all light and depth. He seemed articulating this attempt as a structural and practical thinking that would allow him to conceive an exit: to penetrate the void with the light, allowing the light to be perceived like a bridge into the sensitive matter by turning it into pure action. The visitor looks at the painting and the painting seems to expand (each circle inscribed in the square seems expanding its outline), then the surface intersects, creates duplicates of itself, becomes a filter and then a metallic curved shape, thin as a line and ready to exit from the two-dimensionality that still holds it to the wall. Seen it through “Deleuzians eyes”, all the work of Lo Savio appears to me as a bright attempt to streak an otherwise amorphous psychic space; striated in the sense of organizing a thought about the world, defining the sensitive matter with the solidity of the geometrical and phenomenological reasoning, embracing light as systematizing force.

“I was especially blown away by the pathos, that great symbolic passion that he connected to his rationalism, to those seemingly ‘cold works’ of his.” G.C.Argan

I produced physical ‘scores’ for a visitor at a time and I offered myself as a filter, as a diaphragm to the vision of Lo Savio’s work : you could enter inside only if accompanied by me. Just two minutes of a guided tour, blind-folded, with headphones on, a different audio track paired with six of the works in display. I guided with my hands the visitor’s body, I sometimes I folded it and finally I took it back to vision, in front of the work that I chose to direct the viewer to.

If the entire body of work of Francesco Lo Savio shows a constant need to weave conceptual and experiential “warp and woof” (moving in the black / smooth psychic dimension, in which he was immersed), I chose to blindfold visitors to let them experience the same “smooth” blackness, to create later a disruptive view enhanced by the totality of its work in front of them. audio track 1 (U. Kultermann) The creations of this period also explore the possibilities offered by art destined to the mass and Lo Savio moved his studio into a factory to analyze the mechanized production. Based on the finest and most precise drawings, the realization process thus takes place directly on site, in the context of the factory but it leads to the creation of original. Using the highest degree of industrial technology has resulted in the creation of works that, in their modular black surfaces, are charged with an emotional approach, managing to touch the soul and the mind of the viewer. audio track 2 (F. Lo Savio) Even when you, viewer, will walk around the world I have created – even when you inarticulate spectators, tables and chairs and other made and created works, transmit your vibrations – my plastic dramas, my drama of birth and creation of light and space will be held in a  space of silence built by me, bacause I locked them in a womb, in a shelter made of thick stone and concrete. audio track 6 (F. Lo Savio) For me the light is not the sequence of a painting, but rather the sum of different images in a continuous evolutionary movement. The concept of light, understood as pure observation, it would be meaningless if it wasn’t in direct contact with the essential dynamics of the origin of life. Every aspect of light arises in connection with other types of element and embarks on a journey exploring the possibility of losing the meaning of existence itself, the extreme journey into the void. audio track 4 (G. Uncini) Yeah, it was a kind of pulsing, was not even a form, was an expansion from inside to outside and viceversa, but more than anything else I considered it as a pulsation, a thing that was moving on the surface and it came out like a luminous dust. The area definitely disappeared, it was really an image, a cross-section of a compressed air condensate that assumes a color, but it was definitely not a monochrome intended as monochromatic painting, because it wasn’t painting and that was what we all had in common in that period: the overcoming of the informal art.